Twitter is being increasingly used in academia as a tool for self-promotion, information sharing, networking and public outreach (Mahrt, Weller and Peters, 2014; Veletsianos, 2012). The use of Twitter enables scholars to select and combine a variety of semiotic resources (e.g. linguistic forms, video, images, audio) afforded by the social networking site to achieve the communicative purpose of the tweet. It is therefore necessary to approach the analysis of academic Twitter from a multimodal perspective, and explore how scholars make meaning through the selection and orchestration of modes in this particular context of communication. Previous research on Twitter in scholarly communication has focused on its use by individual scholars or in the context of academic conferences, with no attention to how this social media platform is exploited by research groups. The aim of this study is to analyze the multimodal practices of research groups when using Twitter. I examine how these groups engage in multimodal digitally mediated communication to connect with diverse audiences and negotiate their relations with these audiences. More specifically, in this study I address the following questions: (i) what are the purposes for which research groups use Twitter?; (ii) how are different semiotic resources utilized to connect with different audiences and achieve the groups’ purposes? To answer these questions I combine discourse analysis and multimodal analysis of 240 tweets taken from the Twitter accounts of 6 research groups. The analysis reveals that, when composing their tweets, research groups orchestrate the available semiotic resources skillfully to achieve four main communicative purposes: community building and networking, self-promotion and publicizing of the group’s research output, calling to action and identity construction. 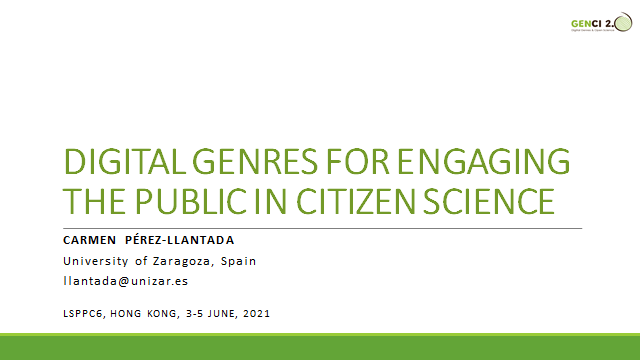 Citizen science is a case in point in the current Open Science movement towards making science more democratic, accessible and participative to a wide audience (Fecher and Friesike, 2014; Follett and Strezov, 2015). Drawing on the affordances of the Internet, in citizen science projects researchers can approach science to the general public, raise their interest in science and trust in scientific research and increase their science literacy (Bonney et al., 2009). Taking the perspective of genre, register and style (Biber and Conrad, 2019), this presentation focuses on the way scientists represent, re-use and share scientific knowledge with interested publics and how they persuade them to collaborate with them in different aspects of the research process (data collection and classification, and discussion of the data with the scientists). A case study of a citizen science project from Zooniverse1 platform will be used to discuss the linguistic features that characterise this genre and the major functions these features are associated with (e.g. interactivity, expressing personal stance, referring to shared expert/professional knowledge, describing, explaining, elaborating information further, and so on). Other aspects of genre, register and discourse style in relation to the en-textualisation of expert knowledge through processes of re-interpretation, re-organization, and refocusing (Gimenez et al., 2020) will also be discussed with a view to highlighting the adaptability of language to the rhetorical exigences and communicative demands of the genre. Lastly, some implications for genre theory will be discussed in relation to the view of this genre as one that retains its individual integrity and degree of stabilisation regarding generic norms and participatory mechanisms (Bhatia, 2004: 127) and, more broadly, the view of specialised genres for public communication of science as intrinsically context-based and situated, socially tied to circumstances and science stakeholders’ exigences.

In an ever more competitive academic world where granting application has become a highly demanding administrative procedure, scientists choose alternative ways like crowdfunding to collect funds for their projects (Mehlenbacher, 2019). From the perspectives of genre analysis and sociorhetorical studies, engaging a broad general audience into a scientific research project, and persuading them to donate online, involves recontextualisation of scientific discourse (Luzón & Pérez-Llantada, 2019) and  a repertoire of verbal and audio- visual modes through which  communicative purposes can be met (Hafner, 2018; Rowley & Jolivet, 2004). One of the most significant genres embedded in online crowdfunding platforms is the video pitch, where scientists have just a few minutes to impress their viewers with their credentials, enthusiasm, and ideas. Including a video in a crowdfunding campaign has proved to produce a substantial persuasive effect on potential donors (Doyle et al., 2017; Greenberg et al., 2013), and therefore, its study is worthwhile. Relying primarily on Swales’s “Creating a Research Space” (CARS) model (1990, 2004), and taking previous linguistic analysis of grant proposals into account (Connor & Mauranen, 1999), for its affinity with crowdfunding videos, this study aims at exploring the rhetorical structure of this emerging digital genre. A corpus of 50 videos, supporting Biology, Ecology and Medicine projects, was collected from the online platform Experiment.com, and their moves and steps were coded with the qualitative analysis software Atlas.ti 8. The analysis shows the use of compulsory moves and steps for this genre, as well as recurring linguistic realisations, as compared to those of the grant proposal. Moreover, it demonstrates the significant role that moves play to convey preparedness and passion to convince non-specialised audiences.