Uncovering the discourse of open access predatory journals. Bocanegra-Valle, A.

The pressure-to publish trend in academia has contributed to the proliferation and expansion of journals from predatory publishers (Fazel & Hartse, 2020; Power, 2018). Many of these publishers usually email scholars promising short peer review turnarounds, high acceptance rates and, therefore, fast publication (Bocanegra-Valle, 2017). In the extant literature these journals are called ‘predatory’ because although they claim to be legitimate, they misrepresent current academic publishing practices (Elmore & Weston, 2018). It is outstanding that, by exploiting the author-pays model (Beall, 2012), this kind of journals has increased by 25 % in just two years (Oermann et al., 2018). Researchers within the health sciences are particularly concerned with predatory publishing practices and how to identify them (Elmore & Weston, 2020; Shamseer et al., 2017), even websites have been set up to help researchers identify trusted journals (e.g. <thinkchecksubmit.org>); however, information for scholars and researchers in other disciplines is very scant and, at times, might even be misleading to novice scholars in academia. This study sets out to investigate the strategies that predatory journal editors employ to appear trustworthy and generate interest among prospective authors. Focal questions are: (1) what are the most salient themes that these email messages contain with the aim of appealing readers? and (2) what are the linguistic strategies that predatory journals use with the aim of engaging academic writers for article submissions? The investigation draws on a small corpus of email messages sent by predatory publishers and collected during the past two years. This dataset was first coded and then qualitatively analysed using NVivo 11 Pro. The analysis showed that it is possible to identify themes that are common across predatory messages (like bogus impact factors or fake editors) and that these emails use linguistic and paratextual elements that act as “hooks” to achieve their predatory aims.

The changes in scientific publishing driven by the Open Science movement and enabled by Web2.0. have led to the emergence of new (audio)visual “abstract genres”, designed to supplement the traditional written abstract by presenting content in a more engaging way. One of these genres, adopted by a large number of medical journals, is the visual abstract. This a type of abstract which combines verbal and visual modes to convey the key findings of the article, and which is being used by journals for promotional purposes.  Its brief format and visual design help readers get a quick overview of published research and make it appropriate to disseminate research results quickly to members of the community. In this paper I analyse a corpus of 60 visual abstracts from four online medical journals, and compare them with the corresponding written abstracts, in order to answer the following questions: (i) what is the rhetorical (move) structure of the visual abstract?; (ii) how are the different moves realized (i.e. what kind of linguistic and/or visual resources are used to realize the moves?); (iii) how are various semiotic resources orchestrated to engage the audience and draw their attention to the key findings?; (iv) how is the text in the written abstract transformed linguistically and multimodally to respond to new needs and new expectations from the audience? The results show variation in move structure, although there is little variation among the abstracts from a single journal, and functional specialization (Kress et al., 2001) of the verbal and visual modes. They also suggest that visual abstracts are a hybrid genre combining features of the written abstract and of infographics.

With the advent of digital technologies, several multimodal research genres have emerged in mass media during the last decades (Rowley- Jolivet, 2019). A likely reason is that web-based communication allows the creation and rapid diffusion of texts merging a variety of audio-visual and verbal modes, through which genre users can (i) reach a wide and diverse audience and (ii) convey their communicative intentions more effectively and creatively than with a single verbal mode (Hafner, 2018). A further reason can be found in the Open Science or science democratisation movement, in response to which researchers are taking advantage of internet semiotic affordances to disseminate their work, interact with interested (specialised or non-specialised) publics, and promote the results of their studies (Luzón & Pérez-Llantada, 2019). An interesting practice that is gaining prominence in science communication platforms on the Web 2.0 is crowdfunding (CF), a revolutionary strategy ever more used for entrepreneurs and scholars of any discipline to diffuse their research projects and collect online donations to carry them out. In CF platforms, several multimodal genres are embedded, of which the project video is particularly significant, given the potential that it has to facilitate and enhance science communication (Doyle, Freeman & O’ Rourke, 2017). In parallel to the development of CF and science digital genres, there is a growing concern about the role that women play within the areas of science, technology, engineering, and mathematics (STEM). Even if the female presence in them is slowly growing, men still vastly outnumber women, and the gap between them remains alarming (Corbett & Hill, 2015). It has been shown that this is partly because of the lack of visibility that the work of women scientists has had along history, which has led to unconscious beliefs and stereotypes about gender and professional careers, and therefore, the disinterest in science on the female side (Nimmesgern, 2016). These gender biases are reinforced by underrepresentations of women in STEM. Some examples are the lack of women references in school textbooks or the little female presence in STEM workplaces, which perpetuates the stereotype that STEM subjects are male fields (Hill, Corbett & St. Rose, 2010). The aim of this study is to apply a multimodal analysis from a social semiotic perspective to examine how gender identities are represented in eight crowdfunding project videos of science created by undergraduate students for the International Genetically Engineered Machine (iGEM) competition, hosted by the CF platform experiment.com. Relying on the Swalesian move-step analysis genre approach for the verbal content (Swales, 1990, 2004), and Kress and van Leeuwen’s Visual Grammar (VG) model for the visual content (Kress & van Leeuwen, 2006), the analysis intends to uncover ideological purposes and meanings about gender roles within a context of scientific research. The results are compatible to previous studies that confirm that women are underrepresented in STEM, highlighting the ideologies that lead to the reinforcement of gender bias at the workplace. 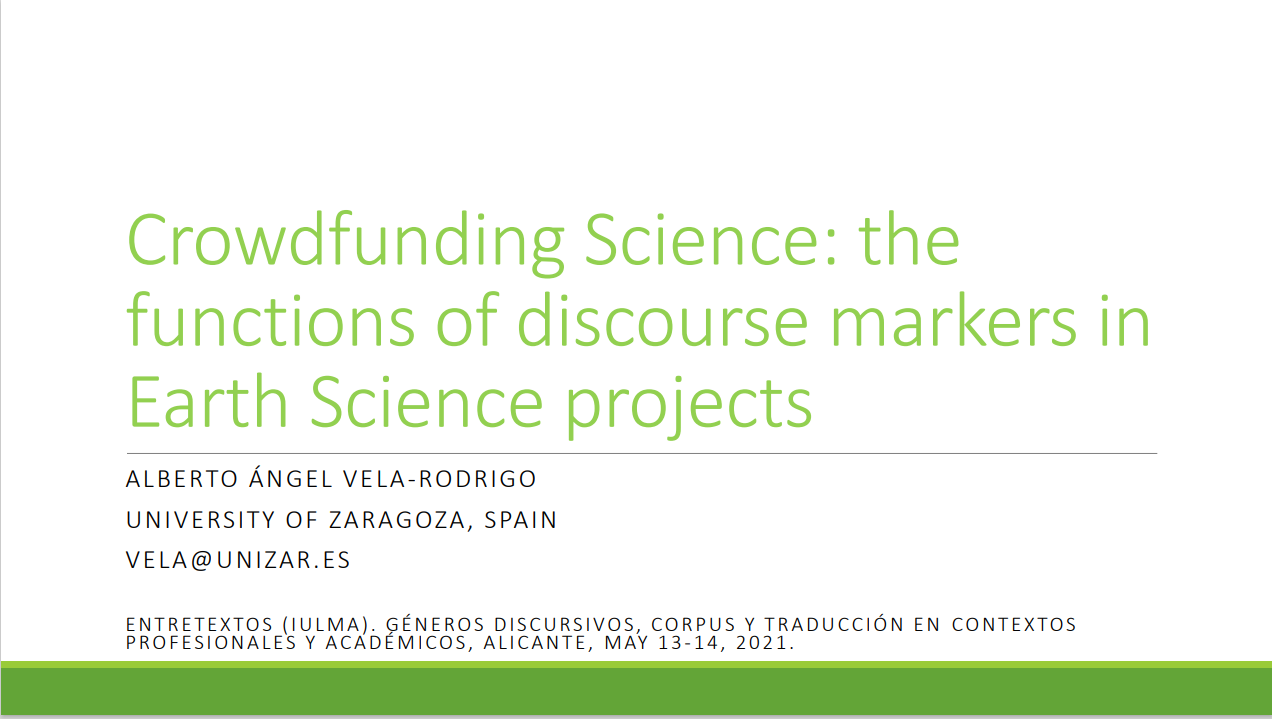 In a scientific context of growing interdependence at a global level, crowdfunding platforms stand out for their practical, dynamic and participatory nature, offering researchers the opportunity to share and disseminate their work, while interacting with a non-specialized public. The aim of this paper is two-fold. Firstly, to analyse a small-scale corpus of Earth Science projects of Experiment.com. and critically assess the rationale for the rhetorical organisation and recurring discourse features of these projects. Secondly, to understand the strategies that researchers use to recontextualize and adapt specialized contents to Internet audiences. To fulfil both aims, I will draw on seminal rhetorical and EAP genre studies (Bazerman, 1994, 2016; Miller, 1984, Swales, 1990, 2004) to specifically examine the role and functions of discourse markers in these texts, as they play a key role in conveying authors’ professional and personal identities, as well as in enhancing the authors’ explanatory and guiding intentions and in emphasizing the key ideas so as to ensure the readers’ understanding of specialized knowledged In the light of the findings I will finally assess the validity of their content within the growing international interest in the state of the planet, and for the ethical, political and human scope that these projects can achieve within the fulfillment of the Sustainable Development Goals (SDG).