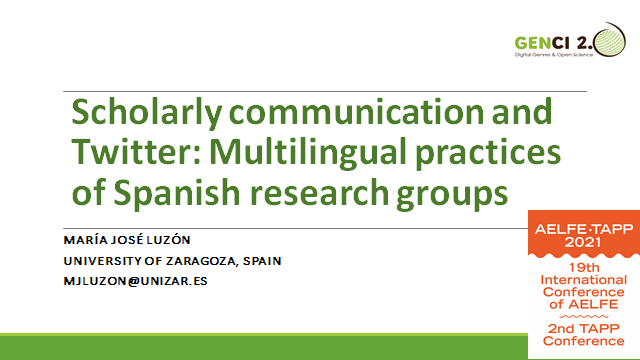 Individual scholars as well as research groups are increasingly using Twitter as a tool for self-promotion, information sharing, networking and public outreach (Mahrt, Weller and Peters, 2014; Veletsianos, 2012). Multilingual scholars, in particular, use their Twitter accounts to reach diverse local and global audiences (peer researchers, students, interested publics). This collapse of context, i.e. the flattening of multiple audiences into one (Marwick and Boyd 2011), affects the content, the choice of language and the way language is used in tweets written by these scholars. When writing a tweet multilingual scholars take into account their audience(s) to choose between English (the lingua franca of academia), their first language, and other languages in their linguistic repertoire.

Previous research on Twitter in scholarly communication has focused on its use by individual scholars or in the context of academic conferences, with no attention to how this social media platform is exploited by research groups. The aim of this research is to analyze the multilingual practices (Androutsopoulos, 2015) of research groups affiliated to Spanish institutions when using Twitter. More specifically, in this study I address the following questions: (i) what are the language choices of Spanish research groups in their Twitter accounts in relation to their networked audiences?; (ii) which discourse strategies do these groups use to engage and connect with different audiences and achieve their communicative purposes? (Hyland, 2005), (iii) how are these groups using Twitter to connect different language groups and mediate between expert audiences and public audiences? To answer these questions I combine content and discourse analysis of 300 tweets taken from the Twitter accounts of 6 Spanish research groups.  Each tweet post will be coded for: (i) the language of the tweet; and (ii) the main communicative purpose. Tweets will then be examined to analyze how discursive features are used to engage diverse audiences and achieve these purposes.

Androutsopoulos, J. (2015). Networked multilingualism: Some language practices on Facebook and their implications. International Journal of Bilingualism, 19(2), 185–205.