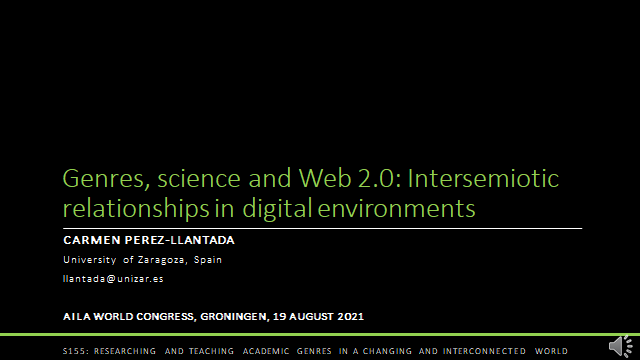 This presentation contributes an enhanced understanding of the crucial role that genres of research play in the diffusion of science on the Internet. To this end, I draw on the view of genre as “an open category at least partly bounded by constraints of time, resources, availability and access” (Swales, 2004: 72) to reflect on various theoretical and methodological challenges that genre analysts often face when investigating the intersemiotic relationships of the different types of assemblages of texts defined by Spinuzzi (2004), namely, genre sets, genre systems, genre repertoires and genre ecologies. To illustrate how these assemblages of online texts are interconnected I will examine aspects of ‘inter-genre-ality’ (Devitt, 2009: 44), that is, the extent to which “genres take up forms from the genres with which they inter-act”, and explore the degree of intertextuality of content and language as well as features of hybridity and interdiscursivity that result from the merge of discourses (e.g. the discourses of science, pedagogy and journalism) (Bhatia, 2004; Motta Roth and Scherer, 2016) in some digital genres of science. Because the affordances of Web 2.0 are dramatically changing texts-composing practices, the exploration of the above-mentioned features will bring in several considerations regarding the use of strategies of ‘science accommodation’ (Fahnestock, 1986) and ‘recontextualisation of expert knowledge’ (Bondi, 2015) to make science accessible to the general public. Given the unprecedented public dissemination of science in today’s increasingly interconnected world, I will conclude with some pedagogical proposals for making novice and expert scientists savvy in the use of digital genres so that their research findings are impactful and meaningful to today’s diverse science stakeholders (expert scientists, funding agencies and society in general).